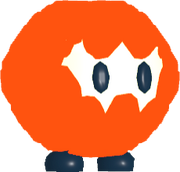 Pets are creatures that can be hatched from Eggs. They are the core of the game Pet Swarm Simulator.

You can command your pets to harvest food, and defeat enemies to gain eggs. Once you collect enough food, the eggs hatch into more pets.

Once the player enters the game, they have an equipped Dog with them. The tutorial prompts the player to first kill an Evil Shroom, collect and plant the Noob Egg, then gather Red Berries to hatch the egg. Once the tutorial is completed, the player can no longer obtain a Noob Egg, and instead they get the Forest Egg 1 if they defeat an Evil Shroom and other eggs by defeating more progressively harder monsters.

Community content is available under CC-BY-SA unless otherwise noted.
Advertisement